Hopefully you have made a good start to the quilt and month ones' block is complete. To lay down the pond, rocks and mum and dad penguin follow the same principal as in month one using fusible paper and following the magazines fabric guide.

Once all the background has been done and stitched all you need to do is make three cute little penguin that can hop from one fish to another! 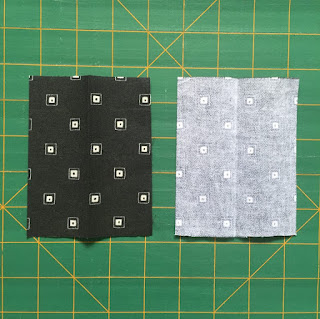 For the front of the penguins, iron 3 of the large black rectangles & 3 small rectangles onto some lightweight interfacing - you will need interfacing that can be fused.
Lightly press the large rectangles in half matching the two longest edges together to mark a centre line. This will help position the penguins tummy. 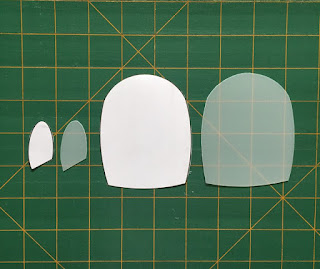 Place the template plastic over the pattern template and trace the shape for the penguins body and the penguins wing and then cut along the drawn line. 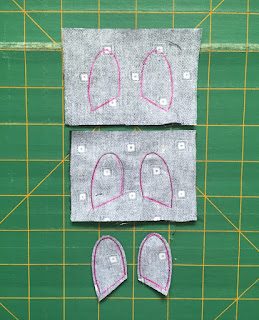 To make the penguin wings, pair up the small rectangles. Each pair will have one rectangle with interfacing and one rectangle without. Place them with right sides together. Onto the interfacing side, trace around the wing template twice to make a pair of wings for each penguin.
Reduce the stitch length on your machine to 1.5 - this will ensure that the curve is nice and smooth and will not split once turned through. Machine stitch over the drawn curved line of each wing shape. Do not stitch over the straight line at the bottom of the wing!
Cut around the stitched line leaving about an 1/8in seam allowance. Turn the wing right side out. This can be tricky . . . place the end of a pencil into the tip of the wing then carefully roll the wing over the wing.
For a really nice smooth edge to the wings, roll the seam between your fingers working the seam right to the edge. Press firmly with an iron.
Repeat the process to complete 3 sets of wings. 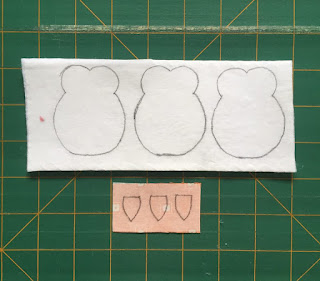 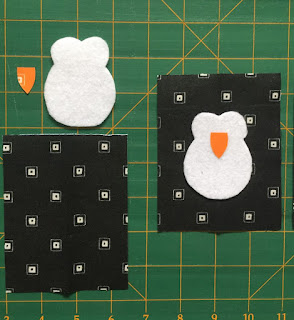 Cut the tummies and beak out along the drawn lines. To get a good smooth curved cut, move the shape into the scissors rather then moving the scissors around the curve. Peel the paper away from the baby penguin tummies and place onto the black fabric rectangles with the interfacing. Use the pressed line to help centre the tummies. Press in place again using the heat mat. Fuse beaks in place. Machine blanket stitch around the white felt and orange beaks with colour matched thread. For this project we matched the bobbin thread to the top thread. 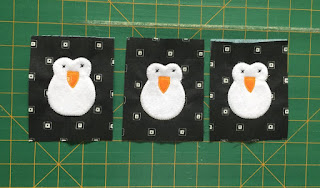 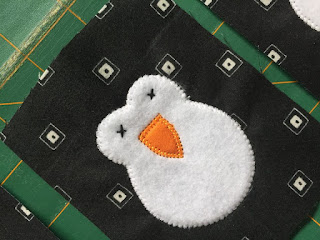 Mark where the baby penguins eyes should be. Hand stitch a small cross stitch in place for each eye. Use three or four threads of standard embroidery floss to make the eye bolder or use a 12wt thread as we did. 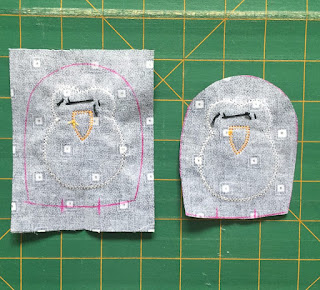 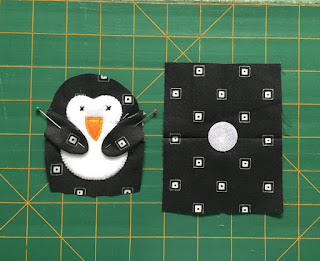 Once the three bodies have been cut out turn them over to position the wings. Line up the raw edge of the wings with the edge of the penguin as shown above making sure the wings are laying into the penguins body. Pin them in place. Its a good idea the tack them in place or if you are confident then you can leave the in pins for now.
To the centre of the remaining 3 large rectangles which are going to be the backs of the penguins, hand stitch a hook fabric dot to complete the baby penguin backs. If you are using sticky hooks this can be a bit tricky as the glue likes to cling to the needle so it helps to use a thimble! 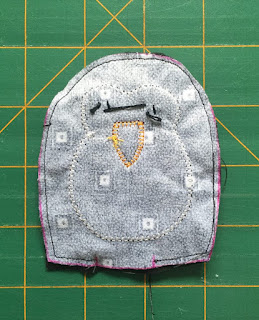 Place the front and back piece of the penguins with right sides together ensuring that the velcro dot is lined up with the centre of the penguins tummy.
Machine sew with 1/8in seam allowance around the shape making sure you start and stop at the marked lines at the bottom. Trim the shape. for a really smooth curve snip along the curved edge but be very careful not to clip the stitches. They actually work pretty well without snipping along the curve! 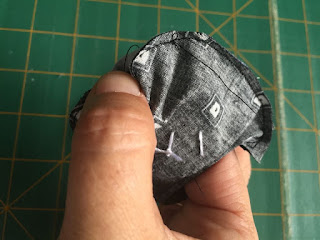 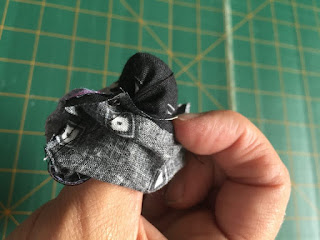 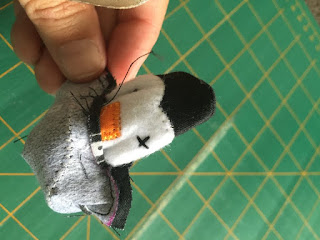 To turn the penguins right side out place your finger into the penguin and then place your thumb and finger together. Gentle fold the the penguin over your thumb. Once his head has poked through it should pull through with ease.
Run your finger along the inside against the line of stitching to push the seam out & then gently press along the seam with a warm iron. It helps the next step if you can iron in a nice fold along the gap ready for stitching. 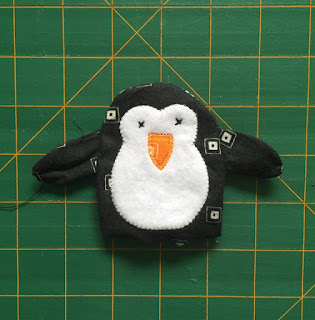 Stuff the penguins with hobby fill and stitch up the gap at the bottom with black thread using a whip stitch. 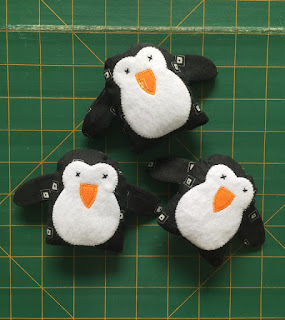 Ta-dah! . . . three finished penguins for your little one's to play with in the penguin pool.

Next month, Jemima will be hosting a tutorial on her blog tiedwitharibbon on how to perfect the quilting should you have got a bit behind with that!


Don't forget to send us your progress pictures, tag @tiedwitharibbon and @claireturpindesign in your BOM and #homespunzoobom #homespunbom2017 in your Instagram posts. 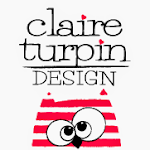